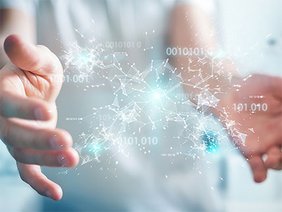 How much time can be saved by automated software creation using a code generator? The Freiburg-based IT companies highQ Computerlösungen and Generative Software have tested this using a practical example and created a first version as a web application from a desktop program in just under seven hours.

The advancing digitalization does not even stop at the digital industry itself: More and more programming tasks are now being performed partially or fully automatically by so-called code generators. This approach, also called model-driven software development, relieves human programmers of routine tasks and reduces the risk of errors. In addition, the development process can be accelerated considerably - Generative Software, developer of the cloud-based development platform Virtual Developer, recently demonstrated how fast it actually works together with its customer highQ in a practical experiment. "We simply wanted to know how much code can be developed in just one working day with our generation logic if the project is completely new territory for the developer", says Marcus Munzert, Managing Director of Generative Software. abakusBT, a proven and mature software from highQ for the controlling of developer loans, was selected for the experiment. It is a desktop application that is used by around 60 Volksbanks and savings banks nationwide. The challenge for Marcus Munzert and his product Virtual Developer: By the end of the day, a first executable version was to be created as a web-based solution. To put this ambitious goal into realistic spheres, the experiment was limited to the pure development of the source code and an application server including an empty database was set up in advance on which the application could be started. The setup for the automated software development was also created to be able to use the corresponding software generator. The JEE generator on the Virtual Developer platform was used to generate code for web applications.

In just under seven hours to a fully functional app
The experiment started at 9:45 am. Heinz Rohmer recorded the individual work steps and the times required for this. Christian Disch, highQ's managing director and product manager for abakusBT, stood by as "experiment customer" and showed the masks and input forms that were to be implemented in the first web version in any case. Only three hours later the first version of the new web application saw the light of day, and after further iterations, in which additional input masks, overview pages and links were modeled, generated and adapted, and after the final completion of the navigation, the experiment was successfully completed - after exactly 6 hours and 50 minutes. During this time, over 350 files of source code were generated. At highQ they were impressed by the result: "All the forms I

had pre-selected were implemented in the web application," confirms Christian Disch. Thus, a working prototype with first basic functionality of abakusBT is given, even if numerous extensions would be necessary for the complete web application. "But even these we would surely be able to create in record time thanks to the automatic code generation". Marcus Munzert is also satisfied: "We were able to demonstrate how quickly and effectively the porting of a software to a new platform can be implemented with our tools". If this had been a "real" customer project, developers and users would have benefited equally, emphasizes Munzert: "As a developer, I would have gained a lot of time to be able to concentrate on the creative tasks, and for my customer, the time saved would have brought a significant cost saving". For these reasons, Virtual Developer is used intensively at highQ.

Generative Software GmbH was founded in 2007 by the mathematician Marcus Munzert and the engineer Heinz Rohmer. The central field of activity of the company is the industrialization of software development through intelligent code generation using the cloud-based development environment Virtual Developer. Generative Software is based in Freiburg im Breisgau.  www.virtual-developer.com