Commuters lose a lot of time every day on their way to and from work. The Time Miles bonus system promises to help: 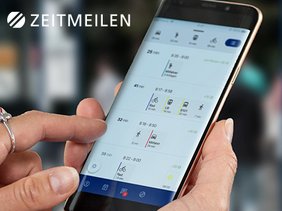 Commuters lose a lot of time every day on their way to and from work. The “Zeitmeilen” (time miles) bonus system promises to help by rewarding flexible, multimodal mobility behaviour and thus helping to even out traffic flows.

The worst situation is in Berlin: according to a study by the US traffic information service INRIX, in 2018 Berliners lost an average of 154 hours of their lives in traffic jams and slow-moving traffic. Things are not much better in other German conurbations. Nationwide, it is estimated that over half a million hours are lost every year, valued at 4.5 billion euros, and the environment is polluted with an additional 600 tonnes of CO2 as a result of the increased fuel consumption. And there is no prospect of a sustainable improvement, because neither the road network nor the public transport system can be readjusted in the short term to meet the anticipated further increase in commuter traffic.

Berlin start-up Zeitmeilen AG aims to demonstrate a way out of this dilemma with a novel digital service. The idea is that rather than stubbornly take the same route every day, commuters should base their route selection on the individual recommendations of their mobility app. Despite having an identical destination, the recommended route can be different every day, or – for example in the case of extensive traffic obstructions – suggest parking the car at the nearest park & ride place and continuing by underground train. In any event, anyone who follows the recommendation will reach their destination faster and with less stress, and the city as a whole will benefit too. This is because the traffic flow will be temporally and spatially evened out and optimally distributed over the existing infrastructure.

For each participant, the Zeitmeilen app determines an individual, congestion-free route to his or her destination. The application is primarily intended for commuters who regularly need to make the same journeys. However, the prediction function also allows new journeys to be time-optimised. The basis for the system’s recommendations is the movement data of all Zeitmeilen users, supplemented by current and historic traffic data from the regional traffic centre. This enables valid predictions to be made based on the most up-to-date data, including taking short-term factors into account. Conversely, the system can also provide traffic authorities with valuable additional information that they can use to influence and optimise traffic flows.

Advantages over other routing apps

Compared to other routing apps, Zeitmeilen has several advantages. For one thing, the system has access to a comprehensive regional database and can therefore also take foreseeable traffic restrictions into account in its recommendations, such as those caused by future roadworks. Secondly, the system not only optimises the individual routes of individual road users, but also the routes of all Zeitmeilen users in parallel, thus making use of “swarm intelligence”. It can also take account of the ‘common good’ by not routing alternative journeys through sensitive parts of a city such as residential areas or past schools, for example. And last but not least, Zeitmeilen meets the highest data protection requirements. The application uses a patented positioning system that conforms to the German General Data Protection Regulation (DSGVO), meaning that no individual movement profiles are created. All processes run anonymously and encrypted via German servers and networks.

All that remains is for road users to follow the good advice of Zeitmeilen and everything would be fine... Unfortunately, of course, humans are creatures of habit and like to take their accustomed route every day. To help them discover new routes and to encourage them to adopt “sensible” mobility behaviour, Zeitmeilen also includes a reward system with gamification components. Anyone who uses the application regularly and follows the route recommendations will not only reach his or her destination faster, but can also – as a thank-you for being flexible – collect bonus points (time miles). These can later be exchanged for non-cash, virtual or monetary rewards, such as periods of free parking or shopping vouchers. In this way, the incentive programme integrated into Zeitmeilen also enables a variety of participation models for regional mobility providers.

Apart from commuters who use the Zeitmeilen app to avoid traffic jams, and local authorities who benefit from reduced traffic peaks, companies can also gain advantages by introducing Zeitmeilen for their employees. For one thing, staff arrive at work punctually and more relaxed in the morning, while concrete savings can be achieved through the more efficient use of company fleets and the reduction of parking spaces. The costs of setting up and operating the Zeitmeilen application are thus rapidly recouped – after all, it takes just a fraction of the costs that would otherwise be incurred in the construction and operation of parking spaces, for example. Moreover, the company can improve its long-term CO2 balance by actively involving its employees in sensible commuting.

Incentives can be used in a meaningful way in the corporate context as well. If an employee follows the recommendations of the app (e.g. driving outside rush hours or using an alternative route), or drives in a resource-saving manner such as carpooling, using public transport or cycling, she or he will collect “time miles” (Zeitmeilen) that can then be exchanged for a bonus. On top of that, internal competitions (“Time Miler of the Month”) can boost motivation. As a supplement to the app, there is a dashboard for tracking individual records of success. This can be placed in the company canteen, for example, to motivate other employees to participate. Because Zeitmeilen always rewards positive mobility behaviour rather than imposing sanctions, employee representatives and trade unions generally have no reservations about introducing such incentive measures.

Today, Zeitmeilen AG belongs to the family of Freiburg-based software company highQ, which specialises in the development of IT solutions for public transport and controlling solutions for banks. Users of the mobility app mytraQ, developed by highQ, can therefore already use the full spectrum of Zeitmeilen functions to optimise business mobility. In addition, Zeitmeilen will continue to be available as a stand-alone app and as a white-label product for integration into routing and ticketing apps from other providers. One example of this type of white-label application is the multimodal mobility app moveBW in Stuttgart. Zeitmeilen has also already been used in the corporate context as part of the SB:digital initiative of the Federal Ministry of Education and Research.

To maximise user acceptance, Zeitmeilen fundamentally follows the principle of “rewarding instead of punishing”. Rather than being sanctioned for driving your own car – as in the case of a driving ban or congestion charge, for example – motorised private transport remains part of the mobility mix optimised by Zeitmeilen. However, if the user chooses, switching to the transport modes of the environmental alliance can be rewarded via the incentive function. In this way, even die-hard motorists are more likely to be won over and gradually moved towards multimodal, more environmentally friendly transport behaviour. Consequently, it may turn out to be more effective for traffic-stricken communities as well as companies to invest a small amount in Zeitmeilen rather than infinitely greater sums in additional roads or parking spaces.

Zeitmeilen AG is a sister company of highQ Computerlösungen GmbH and makes a concrete contribution to the realisation of sustainable mobility. Through the technological networking of information, mobility can be made convenient and stress-free for the individual, efficient for the economy and society, and environmentally friendly.