Sustainable mobility will not be conceivable without the bicycle 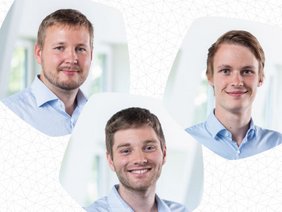 Developed the concept at the NVBW Hackathon: highQ developers Jonas Höffken, Marco Hügin and Valentin Lechner (from left to right)

Sustainable mobility will be inconceivable without the bicycle, which is why it will also play an increasingly important role in transport. In its MobilData BW Hackathon last November, Nahverkehrsgesellschaft Baden-Württemberg (NVBW) wanted to know how we can increase the safety of people riding bicycles. After all, accidents involving cyclists are often serious - especially when they collide with cars, because they lack any crumple zone. According to Martin Jobst of the German Cyclists' General Club (ADFC), after all, around 75% of accidents occur with motorists. In 2019, cyclists were most often involved in accidents in which people were injured after car drivers - a total of 445 cyclists were involved in fatal accidents. Despite these numbers, current route planners do not map the safety aspect of users so far. This is where the hackathon aimed to find a solution.

With the target group of cyclists in focus, the "Buster-Service" project - BusterS for short - aims to reduce accidents and make traffic safer. The idea is not to create a new routing application, but a background system to which existing route planners can connect with an open interface. This system receives certain information from the route planner for one or more selected routes. Based on regional and national data, such as accident statistics and traffic reports, the system is then able to evaluate the routes for their safety.

As an additional data source, input via community apps is envisaged, through which users can feed their positive or negative experiences of a situation into the background system. The result returned by the system will enable the route planner to display positive or negative indications of the safety of various routes in a clearly visible way for users, so that they can choose the safest one if necessary.

In the long term, the solution can also support other road users - the focus is primarily on users of eScooters and pedelecs. Due to the increasing spread and higher driving speeds, there are already serious accidents, so safe route planning could also play an important role in avoiding accidents here.

BusterS is being driven forward by three dedicated highQ developers: Jonas Höffken, Marco Hügin and Valentin Lechner. The management is also expressly behind the project of its young employees; the three can therefore fully draw on the resources of highQ Computerlösungen GmbH, which has already been offering solutions for intermodal and interoperable mobility for more than 20 years and was nominated for the German Sustainability Award 2021.

The NVBW will fund the development work with up to EUR 25,000 until the end of May 2021 - the funding decision has already been received. The tool developed as part of the project will later be available free of charge (possibly with the exception of costs for data transfer) for integration in all common route planners.

"Buster" service refers to a crash test dummy named "Buster", which is used for dangerous experiments in the US TV series MythBusters. BusterS would like to spare as many cyclists as possible this fate!